The history of Samoniówka starts at the early years of the XX century. East side of Nałęczów hill belonged to Michael Górski. 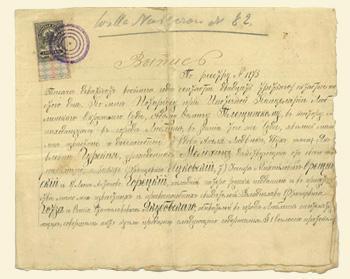 When Michael Górski obtained worldly goods of Nałęczów, redevelopement of park buildings into the Health Centre had been already completed. There were plans to create villa district, so soon after taking over the grounds Górski started to parcel them out. Parts of the terrain situated just around the Health Centre were dedicated to residences, while distant goods were thought to be turned into farms and called Nałęczów Colony. The area of one parcel destined to locate villas measured about half of hectare. These grounds (for example Armatnia Góra, Pałuby, Jabłuszko) cost the biggest amount of money, as their terrain was very rugged and unsuitable for cultivation. (Source: Nałęczów – the history of Health Resort, by Aneta Żuraw, http://teatrnn.pl)

Grounds were parcelled out in 1908. The owner of a lot, which was situated on a right side of the road to Charz B village, was Alexander Bobrzyk. He bought the ground for 772 roubles. Bobrzyk was a carpenter and worked in Health Care Centre in Nałęczów. His passion was bee-keeping and he led apiary. He also worked for local community in Nałęczów Friends Association. Bobrzyk was married to Marie from Szelburg family, very imaginative woman. She was an aunt of Eva Szelburg-Zarembina – polish writer, who wrote books for children. Marie Bobrzyk studied obstetrics in Warsaw, and was the first proffesional midwife in Puławy province.

The house of Bobrzyk was built approximately in 1910 on a hill. Its walls were made of local stones and plastered. The roof was covered with roofing felt, and the building got a balcony and a wooden porch. At the time The Bee House and farm buildings were also constructed. Beautiful fruit trees grew in the garden, and 100 beehives stood nearby. Carriages would stop at east side of the building, droven firstly throug a wooden gate. There was a sign above the gateway: Midwife, and the property was registered as Nałęczów Villa number 82. Local people called the steep hill Bobrzyk Nipple. Eva Szelburg liked to spend time around there.

After death of Aleksander in 1933 the house was inhabited by Marie and her daughter Victoria together with husband Marian Pawłowski, who chaired village leadership and was a convener of Nałęczów Friends Association. At that time their house was called Sołtysówka (from „sołtys”, eng. burgomaster) and came through renovation for the first time. Roofing felt was replaced by tiles made of asbestos. Pillars and balustrade were located on the porch. Since then owners begun renting some romms as lodgings. Well-known teacher from local school, jokingly called „Hephaistos” (because of his hobbling leg) rented one room in Sołtysówka. Before the second world war begun, the area beside the house had changed for a new road to Charz B village had been set.

In 1954 the residence became a co-ownership of Siczek family and Anna Pawłowska. Fourteen years later the property was sold to Henryk Tarnawski and Helena Tracz for 80 000 polish zlotys. Soon after that the house started to decline, as Tarnawski lived there only during summer, using small space in the attic. Practically, it was the only room one could inhabit then.

Meanwhile Nałęczów got city charter. During socialistic governance plans of city and Health Centre expansion appeared. Governors decided to set a park and build a sanatorium for combatants and war-disabled people. Sołtysówka was noticed by one of socialist party dygnitary, willing to transform the villa into a summer house.

Tarnawski was afraid of losing his demesne and sold the property. 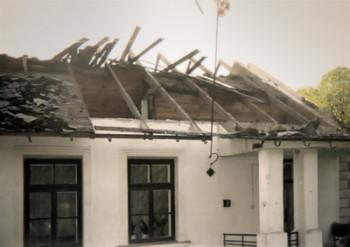 Zbysław and Irena Samoń bought the parcel with house for 90 000 polish zlotys in the 1970s. They both worked in local Health Centre. Zbysław Samoń shared passion with the first villa owner, Bobrzyk – they both led apiaries.

New proprieors had to fight to keep their goods. Irena Samoń wrote many letters with appeals to the Provincial Council and Central Party Commitee, trying to prevent dispossession decisions. Fortunately, she managed to retain the parcel. That case was protracted till the 1980s – then the council finally decided not to develop park on the area.

In 1998 family transmitted their property to their son Radosław and his wife Monika. New propriators conducted basic renovation and developed building in order to provide better adaptation and increase usage convenience.

Growing family and prosperity of residence caused next rearrangement works and gave the building contemporary look. Each of the renovations was supervised by building conservancy agent. All the modifications are kept in between-the-war style of architecture. The original moulding as well as sizes of windows are also preserved,

Apparently, it looks like Samoniówka comes through rebirth right now…